The UK’s leading supermarkets are continuing to increase the amount of time taken to pay their suppliers, according to new research from Funding Options, the online business finance supermarket. It claims the multiples are now taking 40 days to pay suppliers, which is up from 38 days the previous year.* 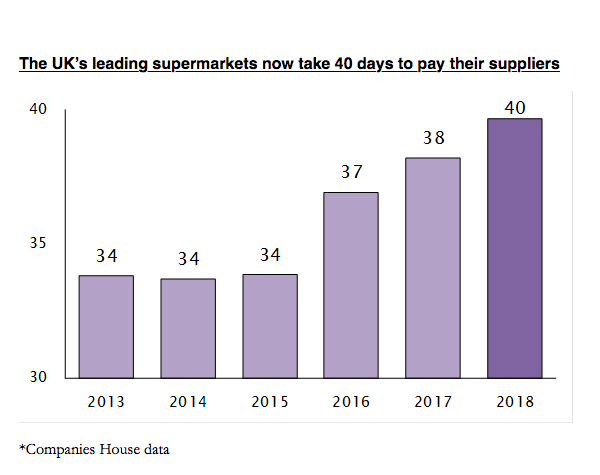 The length of time that supermarkets are taking to pay suppliers has increased by 18% since 2013, when it stood at 34 days.

Funding Options says that suppliers may be forced to wait even longer for payment in the future following the CMA’s rejection of the proposed merger between Asda and Sainsbury’s. Some suppliers fear that those supermarkets will now look to save on costs by paying their bills even later.

Despite a number of Government initiatives to reduce the length of time big businesses are taking to pay their suppliers, the problem continues to grow in some sectors.

One of these initiatives intended to reduce the delays is the Prompt Payment Code, which recommends – but does not enforce – a 30-day payment target for those signed up to it. Signatories include Sainsbury’s, Tesco, and Asda. The Groceries Code Adjudicator was also introduced in 2013, which is tasked with ensuring that the retailers that it regulates treat their suppliers fairly.

Funding Options explained that late payments can result in huge cashflow problems for a small business. Small businesses often rely on timely payments of invoices by their biggest clients to pay tax bills, such as VAT, that are due on a regular basis. Missing these tax bills can be disastrous for businesses, and can result in insolvency or directors being banned.

Conrad Ford, CEO of Funding Options said: “There’s no excuse for paying suppliers late given the amount of money these supermarket giants make.

“Supermarkets have long been accused of taking advantage of suppliers. The Government’s calls for big business to improve their payment practices seem to have largely fallen on deaf ears – and the problem isn’t limited to the groceries industry either.

“While a single late payment will have little or no consequences for a supermarket, a late payment can push a small business into the red through no fault of their own.

“It’s important that food manufacturers and small businesses in general plan for a late-paid invoice. They need to know where they are going to get finance to cover those cashflow issues.

“We see a lot of suppliers to supermarkets coming to us looking for business finance that can help cover those tricky periods, some of which are caused by their clients not paying on time.”