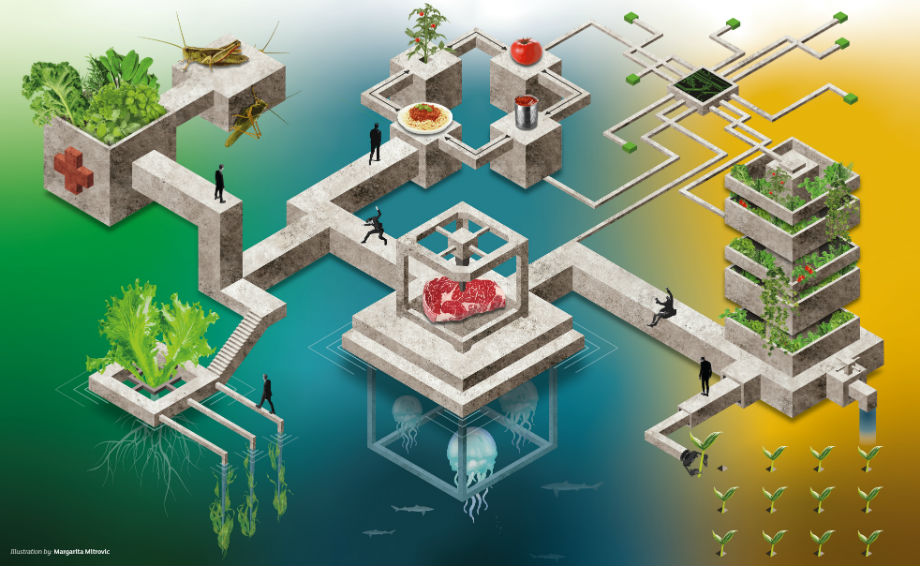 Space farms, food on prescription and jellyfish suppers are all predictions which feature in the Future of Food Report, released by Sainsbury’s.

Commissioned by Sainsbury’s, futurologists Department 22, food historian Dr Polly Russell and plant scientist James Wong explore what, when and how we’ll be eating in 2025, 2050 and 150 years in the future, 2169.

Claire Hughes, Head of Quality and Innovation, Sainsbury’s, commented: “Sainsbury’s has been feeding the nation for 150 years, starting with butter, right through to the incredible array of products available today.  We have a long history of innovation in food, and we look forward to continuing that over the next 150 years.  We know that we have a role to play in expanding the nation’s diets – seen recently with our introduction of plant based ranges – as the current foods we eat aren’t sustainable for a growing global population that will increase to 9 billion in 30 years, and over 11 billion in the next 150 years.

“By 2169, working alongside our suppliers and producers, we predict to have introduced foods like jellyfish and patch dinners to the British diet that are not even fathomable today.”

Food as medicine
In five years time, we could see health professional prescribe dietary advice as preventative health. Bio-fortified foods such as Chestnut Super Mushrooms – which are boosted with Vitamin D and B12 – are already on the shelves of Sainsbury’s. Biofortification as a method is predicted to become widespread by 2025, at a time when nutrition could be a recognised tool used to proactively prevent chronic diseases.

Planet-friendly food
Due to our rising eco-anxiety, health concerns and awareness of animal welfare, it’s likely that a quarter of all British people will be vegetarian in 2025 (up from one in eight Britons today) and half of us will identify as flexitarians (up from fifth today). Innovation within the plant-based realm will continue with Banana Blossom regularly replacing the likes of cod.

Algae milk lattes
The alternative proteins market is set to soar by 25%, with algae milk predicted to become the next plant-milk to take over from the popular nut-based versions.

Insect carbonara
Insects will finally shake their ‘ick’ factor and we’ll start stocking up on cricket flour for our bakes and grasshopper pasta for carbonara. Moringa, kedondong and the bambara groundnut will also be found in more of our cupboards, to tackle the issue that nearly two-thirds of our food currently comes from just four crops – wheat, maize, rice and soybean.

Jellyfish supper
Researchers have recently found that jellyfish makes for a nutritious snack. Full of vitamin B12, magnesium and iron, it’s also low in calories and can be turned into crunchy chips in just a few days. This may well become a popular staple in our diets given the abundance of the species due to warmer oceans and reduced predators.

Cultured meat
By 2050 we could start to see cultured meat shift from an expensive experiment to becoming more of an everyday item. Sainsbury’s could be selling home lab-grown meat kits which can be picked up from the ‘lab-grown’ aisle.

Customised crops
In 2050 we could pick up a carrot from the shelf and know exactly when it was planted, when was plucked from the ground (to the second) and even its individual taste profile. New technological systems, such as blockchain, and a rising need for more personalised information could soon allow for ‘ultra-customisation’ for consumers. Soon we may well be selecting mangoes at the exact desired stage of ripeness or even 3D printed snacks according to our exact spice tolerance.

Space farms
Barren landscapes such as parts of the desert could be transformed into sustainable, fertile farmland, thanks to food growing experiments and technologies used on other planets, such as Mars.

Implant food deliveries
In 2169, we could start to see personal microchip implants become the norm. Developed to store and analyse all the genetic, health and situational data recorded from our bodies, we’ll know exactly what we should be eating and drinking at any point. Retailers, such as Sainsbury’s could play a critical role, arranging automatic drone deliveries of the required food item or vitamin patch as soon as energy or nutrient levels dip.

Patch dinners
Advances in artificial intelligence could mean we will have the option of consuming all the nutrients and vitamins we need through a patch or pill. With our bodies now taken care of, the role of food will once again play the vital role of bringing friends and families together.

James Wong, Plant Scientist, said: “For decades, diets have been simplified to include core ingredients that provided sustenance, and with that we witnessed a decline in the varieties of some ingredients.  However, what we are seeing now – especially with the explosion of plant-based foods – is that diversity in food is returning to the British diet, including ancient crops like quinoa and South-East Asian staples such as Jackfruit.

“With that increasing variety in diets, comes more understanding of where our food comes from and a deeper appreciation of food production.”

Dr Polly Russell, Food Historian, added: “Throughout history food trends have been determined by a complex range of economic, political, social and technological factors. Although in many ways how we shop, eat and cook looks radically different from 150 years ago, there are some things which will never change – food has always been an important part in bringing people together. So, even if we end up relying on patch or pill dinners for our physical health by 2169, food will still play a key part in our emotional, social and psychological wellbeing.”

The Sainsbury’s Future of Foods report includes further research and expert quotes, and is available at https://www.about.sainsburys.co.uk/~/media/Files/S/Sainsburys/pdf-downloads/future-of-food-08.pdf