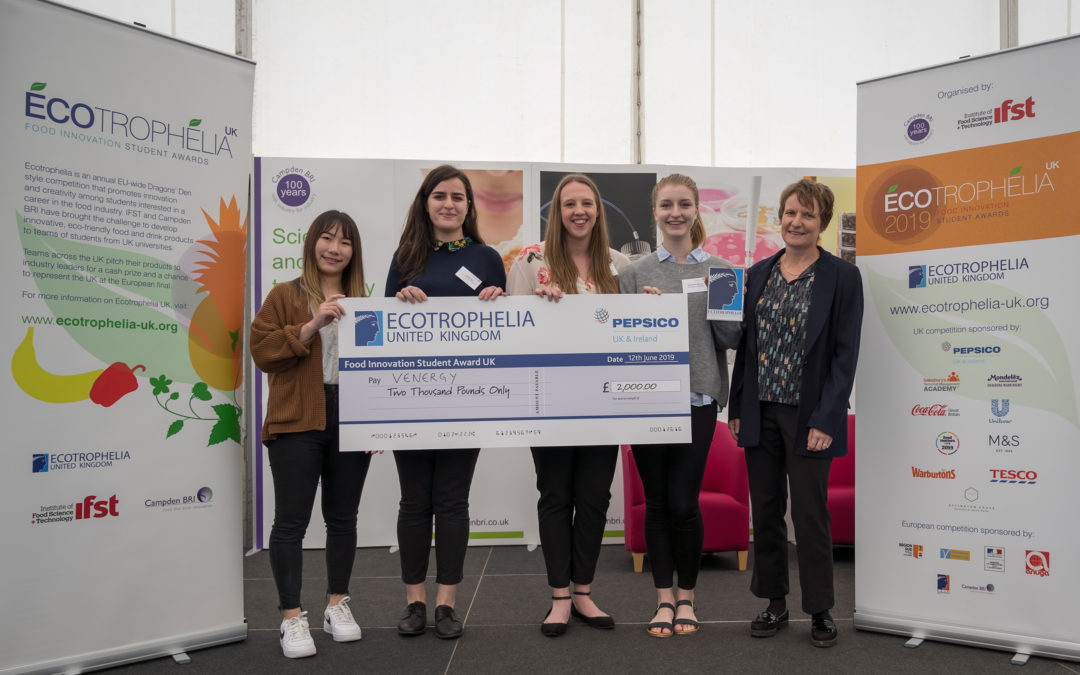 A team of students from University of Reading has won the gold prize at Ecotrophelia for their vegan energy sweets for endurance athletes. The Venergy team has developed lemon and lime flavoured energy sweets which provide a vegan sustainable alternative to energy products, by tackling issues with ingredient and packaging sustainability. Each member of the gold-winning team took home a share of £2,000 and an invitation to become an IFST Young Ambassador.

Now in its seventh year, Ecotrophelia UK is a ‘Dragons Den’ style competition that challenges teams of UK students to develop an innovative, eco-friendly food and drink product. From idea generation through to the final packaged product, the teams get a hands-on experience of what it takes to bring an eco-friendly food or drink product to market.

The finalists pitched their products on 11th June and the winner was announced on 12th June at Campden BRI’s annual open day. The awards were presented by Lindsay Dobson of PepsiCo (prize sponsor).

Alice Bryant, Nutrition and Food Science Student, Reading University said: “We are all delighted to have been chosen as the winners of Ecotrophelia UK! The competition was really tough, and it was an amazing experience. We cannot wait for the finals in October.”

Caruffle team from Nottingham Trent University secured the silver prize and £1,000 for their truffle made from carob and hazelnut with a mixed fruit jelly centre and rolled in popped and ground quinoa. The bronze prize and £500 was awarded to the second team fromUniversity of Reading for their vegan, gluten-free and reduced fat quiche-like product made of a sweet potato base packed with roasted vegetables in a chickpea flour filling. All three prize winning teams will also receive a one-year IFST membership.

Andrew Gardner, operations director at IFST said: “Our Dragons tell us the quality of entries improves year on year, and this year is no exception. Team Venergy are rightful winners with a clear eco-innovative story for their vegan energy sweets. You will be seeing much more of them and the other finalists!”

Venergy team will go on to compete against 16 other national teams from across Europe for the chance to win up to €6,000 at the Ecotrophelia European final, which will take place during ANUGA in Cologne, Germany on 6 and 7 October 2019.

Bertrand Emond, head of membership and Training at Campden BRI said: “It’s fantastic to see so many young people engage with this competition and put forward such innovative products. Over 350 students from 17 different universities across the UK have now taken part since 2013. The 2017’s winning team went on to win silver prize in the European final with their vegan sushi made from cauliflower rice and fresh vegetables; building on the bronze prize the previous year, so we have high hopes for the teams again this year in October at Anuga in Cologne, Germany. We are also delighted by the interest shown and support provided by the industry.”

The UK heat of this Europe-wide competition was organised by UK food and drink research organisation, Campden BRI, in conjunction with the Institute of Food Science & Technology (IFST), the independent qualifying body for food professionals in Europe.